AR - Artist resin: a resin cast copy of an original sculpture, released by the artist. Usually limited to 50-70 unpainted pieces that then can be painted.

BF Best CM Contest - BreyerFest Best Custom Contest: An exclusive competition of the country's finest CMs, entered by their creating artists, & held yearly in the AG at the CHIN during BF. There are five divisions: Repaint, Drastic CM, Fantasy, Theme (a different theme every year), & Performance. Only three finalists are chosen to compete in each division. It is an exceptionally high honor to win this contest & the prize is highly coveted.
​
BF - BreyerFest: The worlds largest model horse convention, held in Lexington KY annually since 1990. It draws 10 to 15 thousand model horse enthusiasts from around the world for buying, selling, trading, showing, socializing, seminars, & more.
​
CHIN - The Clarian/Holiday Inn North: A hotel in Lexington KY, previously a Holiday Inn but now a Clarian, where the festivities of BF turn during the night. It hosts several events during the convention, including the CM Contest, AG, swap meet, Instagram meet-up, NAN live auction (when it is in KY), & the entire hotel is opened by its guests to sell out of their rooms, also known as room sales.
CM - Custom: A store bought horse, or OF, (i.e. Breyer, Peter Stone, Copperfox, etc.) that has been modified in some way by an artist. This can be as minor as glossing hooves or so drastic that no original surface remains. Generally these CMs are referred to as follows:
- Altered: Not a true artistic CM, this is an OF is added upon by glossing hooves/eyes, adding markings, etc.
- Etched: Etching is when an artist takes an OF & meticulously scratches off the factory paint to add hair detail &/or white markings by revealing the white plastic beneath.
- Repaint: Completely repainting an OF horse in any number of mediums.
- Re-hairing: Removing the mold's original mane & tail & sculpting a new one. Another method is to add a mohair mane & tail for a real hair feel.
- Reworked: When an original mold is repositioned by either heating the plastic & bending it, or cutting it to pieces & reassembling it. Some areas may even be replaced by original sculpting. This is measured in percentages with the following terms:
- Simple: Less than 25% of the model changed from the original. (I.e. rehairing, flicking an ear, moving a foot, etc.)
- Major: 25-75% of the model changed from the original. (I.e. moving the pose, resculpting more area, etc.)
- Drastic: More than 75% of the model changed from the original. (I.e. completely changing the pose, muscling, hair, facial features; no original mold remaining. These horses are almost always unrecognizable as to what they started as.)

G1, G2, G3, & G4 - Generation __ (fill in the number): An identification of when a SM mold was released. SM molds were originally released in batches, G1s leased from Hagen-Renaker & sculpted by Maureen Love debut in 1979 & are seldom released by Breyer these days, G2s sculpted by Kathleen Moody debut in 1998, G3s sculpted by Jane Lunger were rleased between 2005-07, & G4s were initially released in 2010 in honor of the World Equestrian Games being held in the States & were sculpted by various artists; G4 seems to cover molds released up to 2014. Since then, new mold SMs have been individually released, but may eventually be called G5, who knows! G_ is often followed by the mold name, i.e.: G2 Clydesdale, G3 Mustang, etc.

KHP - The Kentucky Horse Park: A internationally recognized horse park which hosts national & international equine events, as well as being home to several museums, breed registries, performance disciplines, & famous horses. The KHP is where BF is held by day every year.
​
LSP - Live show proven: A statement that a horse has previously won at a live show. Usually does not mean much as it only takes one class with one entry for even the poorest quality horse to win something.
​
LSQ - Live show quality: A claim that a model is the cream of the crop & competitive in a live show against the best of its ilk (applies to all finishes). It is a subjective term, as one person's LSQ may not be the same as another's. It can be a grossly overused claim in the CM & finishwork world, but there are certainly artists that own it!
​
Marx - An old brand of model horse, also used as a scale name: Marx was a toy company from 1919 to 1980, who made, among numerous other toys, 1:6th scale horses for western toy sets. This lead to 1:6th scale sometimes being referred to as Marx scale. This scale is much larger than Traditional/1:9th Breyers, & is the largest classified scale, though occasionally you can find horses even larger such as Battat models.

MM - Micro Mini: A scale of model horse, roughly 1:64th scale. They are generally thought of as the smallest scale, but do not include the small model rail roaders model horses which can be even smaller.
​
NaMoPaiMo - The National Model Painting Month: A yearly challenge open to the world, founded by Jennifer Buxton in 2017, to completely paint - start to finish - a model horse within the month of February.

NAN & NAN'd - North American Nationals & North American Nationals qualified: NAN is the American championship live show, where only horses who have NAN'd by previously winning a first or second at a NAN Q'd (qualified) live show may compete. NAN usually bounces between Lexington KY & a changing location on the west coast every other year. A horse that wins a NAN champ, reserve, or top ten is usually of exceptional quality.

OOAK - One of a kind: Usually referring to an OF that is, well, one of a kind, but can be applied to an OS that has not be molded for an AR release, or a drastic CM as well. It is looked on as overly dramatic to use this term for any other CMs.

OS - Original Sculpture: A horse that has been sculpted from scratch by an artist.

SM - Stablemate: A scale of model horse, roughly 1:32nd scale. The second smallest scale of Breyer. Often referred to as G1, G2, etc. as the molds were often released in batches & this identifies what year they came out.

Trad - Traditional: A scale of model horse, roughly 1:9th scale. Generally thought of as the largest but actually the second largest. It is the size you think of an average Breyer being. It is the largest scale of Breyer & Peter Stone.

WIP - Work In Progress: Pretty self explanatory, a piece that is not yet finished. 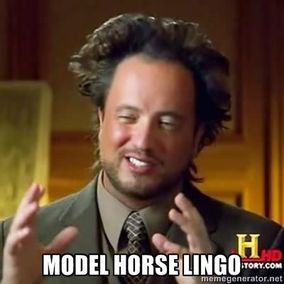